Recently, I was able to get my hands on a copy of Blending Leadership: Six Simple Beliefs for Leading Online and Off by Stephen Valentine (@sjvalentine) and Reshan Richards (@reshanrichards), illustrated by Brad Ovenell-Carter (@Braddo).

First, to save you the suspense, these six beliefs (which encompass the majority of the book) proclaim that blended leaders:

Now, while much has been written about blended learning, Blending Leadership does an impressive job of not just preaching the importance of leaders leveraging both face-to-face and online networks, but the book drills down to the nitty gritty in regards to the why and the how.

For example, in the chapter on engaging with/as thought leaders, Valentine and Richards highlight the following three examples (among others).

A principal, during the summer, is planning for a leadership retreat. Since his colleagues aren’t around to collaborate, he turns to a blog he consistently reads – the blog of Mark Crotty (@crottymark) – to successfully assist him with his work…This example beautifully illustrates the significance of leaders being willing and able to make outside resources their own.

“[Leaders] must find ways, and make time, to wade into streams of voices that exist outside the ones they hear in their own, familiar school contexts. These outside voices are valuable in that they exist beyond the constraints established by context (time and place in particular).”

Example 2: Staying Ahead of the Curve

Richards tells the story of how in an effort to stay ahead of the curve, he used to attend monthly meetings of a consortium of regional school technologists who proposed the discussion topic of computer science education. The knowledge he gained from these meetings, when combined with what he learned in other areas (including online), helped him to see around corners to better anticipate changes when serving various organizations.

“…even if the information being dispersed is of high quality and eventually reaches everyone, this dispersion takes time. This temporal factor means that the person who attains the information earlier has an advantage over the one who learns of it later, and is better equipped to deal with relevant emerging issues.”

Example 3: Networking with Other Fields

Stephen discusses the time he went to an executive coaching conference while he happened to be dealing with what appeared to be an unsolvable problem at his school. Although he was the only educator at the conference, after spending time with a banking executive and a vice-president from a family-owned company, he was able to return to his school and solve the issue.

This type of problem solving, dubbed “pyramid searching” by Harvard Business Review, “encourages leaders to network their way to the top of the field of knowledge in which a problem exists. When they reach that peak…they are more likely to get a referral to someone in a distant but analogous topic area.”

Without hesitation, I can say Blending Leadership is not just for leaders who don’t know where to start in regards to modernizing their leadership capabilities, but the book’s stories, examples, and research (and fun illustrations) also make it a perfect fit for those who “get it” but want to know “What’s next?” 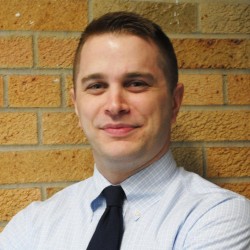 Ross Cooper
I’m an administrator in the Chappaqua Central School District in Chappaqua, New York, and the coauthor of Hacking Project Based Learning.

I’m an administrator in the Chappaqua Central School District in Chappaqua, New York, and the coauthor of Hacking Project Based Learning.